More than 22 million Americans are estimated to be affected by sleep apnea, and up to 80% of them may remain undiagnosed because it’s a challenging disorder to understand. People who struggle with sleep apnea or other sleeping disorders understand how miserable the night can be when you don’t sleep well. Lying in bed feeling tired by unable to sleep can feel like torture, especially if your body begins to be deprived of oxygen so that nothing is working exactly as it should.

Lack of sleep not only affects people at night, but also in the daytime because improper sleep can lead to a variety of problems such as fatigue, daytime sleepiness, forgetfulness, struggles with concentration, learning difficulties, irritability, and even relationship issues. Lack of sleep can even change the appearance by making a person look older more quickly. Not only that, but people who have sleep related breathing disorders, such as sleep apnea, are at risk of developing serious health complications including high blood pressure, diabetes, obesity, heart disease, stroke, and premature death.

Sleep apnea is a sleeping disorder in which the affected person stops breathing at intervals throughout the night. This may happen between five and thirty times per hour, or even more in severe cases. When these breathing episodes happen, the body and brain begin to be starved of oxygen, the heart starts beating faster in order to keep up, and the whole body is thrown into disarray.

Listed here are the most common symptoms and signs to help you notice if you may have sleep apnea. If you or someone you care for exhibits several of these symptoms, it’s best to contact a medical professional for a full checkup and possibly a sleep study.

Left untreated, sleep apnea can be an extremely dangerous condition. If you discover that you do have sleep apnea, the good news is that many treatment options exist that can help you get back to normal life and a healthy sleep regimen. A doctor may allow mild sleep apnea to be treated with natural methods before trying out a breathing machine or surgical intervention.

Depending on the cause of the condition, many people find that sleep apnea can be helped by various natural treatment options such as losing weight, quitting smoking, using a snore guard, humidifying the air in the bedroom, and adjusting the position for sleeping.

One of the more common and simple ways to reduce the effects of mild sleep apnea is to change the position of sleeping. People who sleep flat on their backs may be exacerbating their sleep apnea symptoms because gravity has a tendency to make airway blockages worse. Because Obstructive Sleep Apnea (OSA) is often due to loose folds of tissue in the throat that fall into the breathing passages and block them off, keeping the neck elevated may be helpful in many cases. Changing sleep positions to sleeping on the side may be helpful, but this can be difficult for some people.

Elevating the upper body during sleep may reduce airway blockage, thereby reducing the number of sleep apnea episodes that are experienced throughout the night. Some people find that employing the use of a specialized mattress may be helpful in elevating the body, but changing mattresses can be an expensive investment, and may not be ideal when considering sleeping conditions for spouses.

An alternative to spending thousands of dollars on a whole new mattress, foam wedge pillows for sleep apnea can provide the elevation you need while sleeping. Ranging from fairly affordably priced (just over $20) to fairly expensive (almost $200), memory foam wedge pillows may be used on their own, or in conjunction with a Continuous Positive Airway Pressure (CPAP) machine. Some people find that wedge pillows help with sleep apnea particularly when they are suffering from a cold or allergies that tend to cause congestion and block the airways more severely than usual.

When looking for the best wedge pillow for sleep apnea, consider this one by Cushy Form, offering a memory foam top and breathable cover that is washable. This wedge cushion is great for elevating the upper body while giving needed support to the head and neck. Use it for reducing issues with snoring and breathing episodes, as well as improving alignment of the head, neck, shoulders, and spine. This pillow is particularly recommended by Amazon users who give it more than 4 stars. Plus, because it has a 100% money back guarantee, the purchase is risk free. 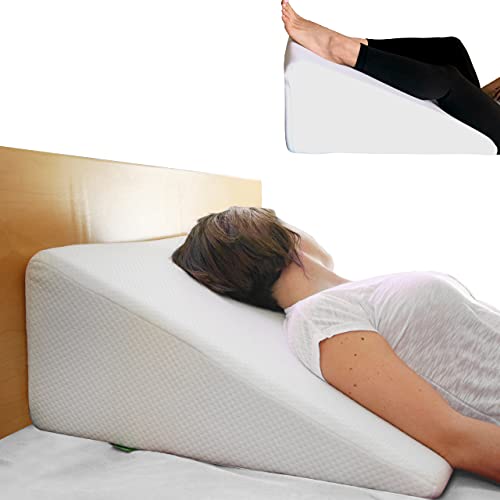 Sleep apnea is a serious condition that can lead to debilitating health problems—but it doesn’t have to. Combining the care of a medical professional with natural remedies such as a foam wedge pillow for sleep apnea gives you the opportunity to take control of your own health and start feeling better again. Once your sleep apnea is treated and you begin getting a full night’s rest on a regular basis, you will likely find that you feel like a whole new person again!

Get your FREE Sleeping Guide

0 shares
Special offer for our visitors

Get your Free Sleeping Guide

We will never send you spam. By signing up for this you agree with our privacy policy and to receive regular updates via email in regards to industry news and promotions